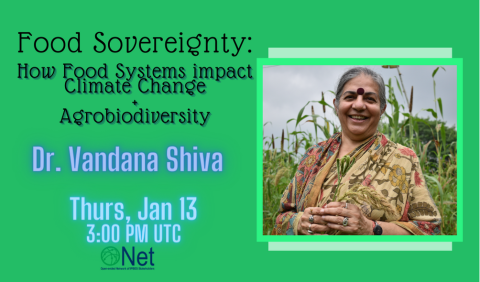 ONet are delighted to continue our webinar series in 2022 and to start with a very exciting speaker.

You can register to attend the webinar, and already submit questions for Dr. Shiva here: https://forms.gle/9f6pYdv6W48BPxPbA

If you did not manage to register in time, you can join the webinar directly using this link.

Dr. Shiva is a renowned food sovereignty advocate, an activist, a trained physicist, and author of numerous books and publications.  She completed her Ph.D. in physics from the University of Western Ontario in Canada, and later shifted to interdisciplinary research in science, technology, and environmental policy at the Indian Institute of Science and the Indian Institute of Management in India.  In 1982, she founded an independent institute, the Research Foundation for Science, Technology and Ecology and in 1991, she founded Navdanya, a national movement to protect the diversity and integrity of living resources, especially native seed, the promotion of organic farming and fair trade.  In 2004 Dr. Shiva started Bija Vidyapeeth, an international college for sustainable living in collaboration with Schumacher College, U.K. Earth University is a place to learn from nature and sustainable traditions and holistic knowledge systems.

For nearly four decades, Dr. Shiva has been an environmental activist that has supported the concept of food sovereignty, the right of peoples to healthy and indigenous foods cultivated through fundamental ecologically sound, regenerative methods.  Through her activism, her work has assisted over 5 million farmers in the conservation of more than 3,000 varieties of rice, and established over 60 seed banks in 16 states across India.  Dr. Shiva maintains that agrobiodiversity, the complex system of plants, animals, and soil organisms are essential to preserve food security in a sustainable agricultural system.

Dr. Shiva combines sharp intellectual inquiry with courageous activism. Time Magazine identified Dr. Shiva as an environmental “hero” in 2003 and Asia Week has called her one of the five most powerful communicators of Asia. Forbes magazine in November 2010 has identified Dr. Vandana Shiva as one of the top seven most Powerful Women on the Globe. Dr. Shiva has contributed in fundamental ways to changing the practice and paradigms of agriculture and food. Her books, “The Violence of Green Revolution” and “Monocultures of the Mind” have become basic challenges to the dominant paradigm of non-sustainable, reductionist Green Revolution Agriculture. Through her books Biopiracy, Stolen Harvest, Water Wars, Dr. Shiva has made visible the social, economic and ecological costs of corporate led globalisation.  Dr Shiva stands behind the belief that the biological wealth of countries from the global South was too often appropriated by global corporations that neither sought their hosts’ consent nor shared the profits.

Dr. Shiva is an active member of several committees and boards, and has served as a visiting professor and lectured at numerous universities and colleges around the world, and has received honorary doctorates. promoting sustainable agriculture, nutrition, and organic farming.  Among her many awards are the Alternative Nobel Prize (Right Livelihood Award, 1993), Order of the Golden Ark, Global 500 Award of UN and Earth Day International Award, Lennon ONO grant for peace award by Yoko Ono in 2009, Sydney Peace Prize in 2010, DoshiBridgebuilder Award, Calgary Peace Prize and Thomas Merton Award in the year 2011.

© Copyright The Open-ended Network of IPBES Stakeholders | All Rights Reserved.